We just got back from RTX, and we got sick as hell -- not from booze, but like a cold / flu. I sound like Barry White, which reminds me I should record my voice right now.

Thank you to all of you who made it there.

I can't begin to tell you how amazing it is to have someone you've never met before say "hey, I liked this song," or "what software do you use," or "hey, I see you have a black pass, what do you do?"

Martha and I had so many heartfelt conversations with people we'd never met or known from the site that we were humbled at the proportions of the growth that this community, this empire of goodness, has experienced since I first joined, as a fan, in 2003.

I've said this before, but if no one listens to a piece of music, does that music really exist at all?

So thank you, you, people that I know, or don't know, or just met, for the greatest gift you can give to someone who likes to make music: your ears, and your hearts. (Your booze is just extra icing, and getting tossed in the pool extra extra icing.)

And thank you, Rooster Teeth, The Greatest Company in the World™ for creating this empire of goodness.

Goldmine Blues is a song we're working on right now.

Occasionally, lyrics are changed. It's all part of the process.

This particular quatrain originally ended with

Martha hated it, saying that she felt she was singing "vagina."

So this is what went down: I step away from my computer. Martha sits in the computer chair, and starts typing potential rhymes.

And one of us came up with the brilliant WARLOCK grrr.

Unfortunately, that's been replaced with a much weaker lyric, but luckily, Martha immortalized our little gem with a screen capture: 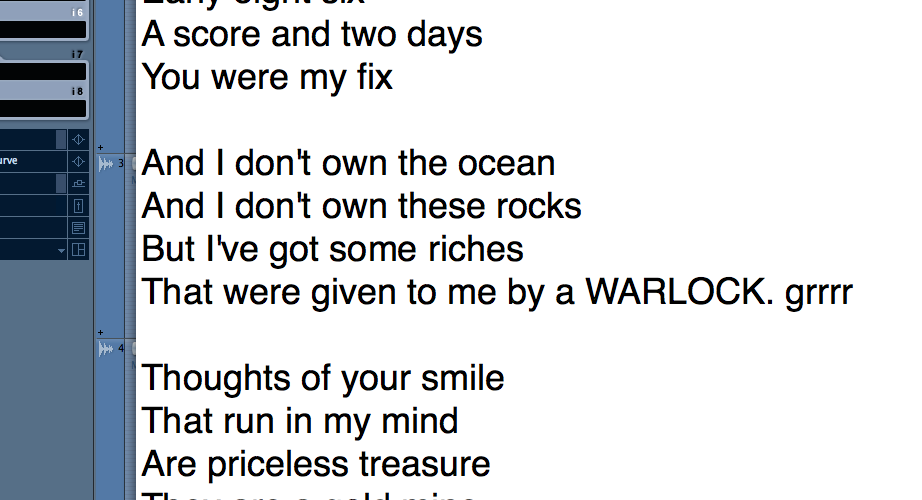 So here is this weird little tune that Martha and I recorded vocals for yesterday. (Of course, she totally rocked it, as usual).

The tune is nothing fancy, just a short, dark little blues ditty. Working title is Keep Moving. You can listen to it here.

Oddly enough, the inspiration for the first line came from playing World of Warcraft: in the game, you spend a long time walking around, wishing you had a mount because walking is slow, and mounts are fast.

I picked up the melody while I was at the RT office in Austin last February. I must have driven poor Geoff and Griffon crazy because I was humming it the entire time; they were nevertheless very gracious hosts, except for that part where Griffon killed me, but that's all behind us now.